Ski grooming is provided free of charge courtesy of the Lakes Region Conservation Trust. The grooming is done by a dedicated team of volunteers as conditions allow. Updates will be posted on this page and on LRCT’s Facebook page throughout the 2022 – 2023 ski season. 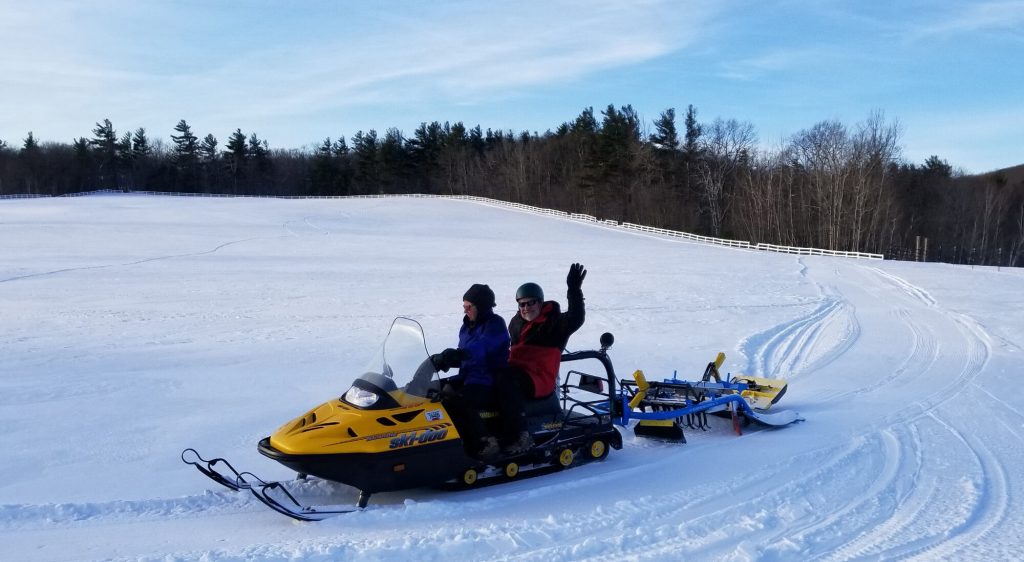 Be nice to the trails! It’s hard work for LRCT staff & volunteers to maintain them.

Trail Updates will be posted here once grooming begins
Past Trail Updates
2/26/2022: The Settlement Trail and one loop around the upper field have been packed since our recent snowfall! The fresh snow was around 4 to 8 inches, depending upon the exposure and wind. The field barely had enough snow to pack but is still proving to be good skiing regardless. The Settlement Trail has a thick (8+ inch) base of frozen snow that at several locations was washed out due to previous snowmelt. Packing helped level the trail and provided a pretty good ski-able surface for the time being. Overall, more snow will be needed in order to groom.
2/11/2022: After chipping the groomer out of a block of ice, our trusty volunteers packed and set track on the Settlement trail and Upper/Lower Meadow Connector Trails just in time for the weekend! Sources say the trails are beautiful – Enjoy!
2/2/2022: Exciting news: The Settlement Trail and Upper/Lower Meadow Connector Trails are now groomed and ready to go! Our volunteers were able to groom in perfect conditions yesterday and will continue to groom throughout the week. If all goes according to plan, there will be fresh snow to groom come this weekend. Think snow!
1/31/2022: The first full packing run for the season has been completed! The Settlement and the Upper/Lower Meadow Connector trails are now packed down, distinguishable, and ready to be groomed. However, grooming the trails proved to be difficult due to how light the snow was this weekend. Our valiant volunteers will give the grooming another go later this week. Stay tuned!
1/24/2022: In short, more snow is needed before grooming can occur.  The snowpack and conditions are extremely variable and firm on the trails we groom.  The last storm provided a good amount of snow, but the strong winds that came with it created substantial snowdrifts and large areas of thin base from wind scouring.  On top of that, the storm finished with heavy rain followed by a rapid freeze resulting in a significant crust on top of everything.  The saturated snowdrifts set up very firm, so firm that the snowmobile with the weight of two people would not collapse them, and the scoured areas turned icy.  These conditions made it very difficult to operate the snowmobile and impossible to drag the groomer.
Our groomers were able to track out (“machine pack”) the Settlement Trail loop and the Upper/Lower Meadow Connector with the snowmobile.  However, the tracks through the fields are hardly discernible as the snowmobile imparted minimal surface manipulation due to the firmness of the snow – not very friendly for skiing.  The wooded trails were a skosh more supple with the best conditions being on the Settlement Trail where the snowmobile track could better loosen the surface, though much of the route remains firm.
Until there is more snow to groom over the current conditions, skiing efforts will be better rewarded to the north, where the rain did not occur.  The good news is that we are ready!  There is a solid (very) base and we are poised to roll out corduroy with the next storm, at which point we will install trail signs and issue an update on the conditions and grooming status.  In the meantime, we’ll keep our microspikes handy and pray for snow!
1/18/2022: We’re gearing up to start grooming the trails in the near future!
PrevPreviousThank You & Farewell to Our AmeriCorps Members!

You can find out more about which cookies we are using or switch them off in settings.

This website uses cookies so that we can provide you with the best user experience possible. Cookie information is stored in your browser and performs functions such as recognizing you when you return to our website and helping our team to understand which sections of the website you find most interesting and useful. For more information, view our privacy policy.

Strictly Necessary Cookie should be enabled at all times so that we can save your preferences for cookie settings.

If you disable this cookie, we will not be able to save your preferences. This means that every time you visit this website you will need to enable or disable cookies again.

This website uses Google Analytics to collect anonymous information such as the number of visitors to the site, and the most popular pages.

Please enable Strictly Necessary Cookies first so that we can save your preferences!